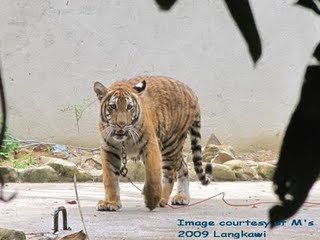 Lazing on a nylon string ….

It seems that the Oriental Village has gotten a Tiger for a show – which is here since last month. We were told that the owner, who also owns the only elephant in Langkawi, said that it was given to him by PERHILITAN – Department of Wildlife and National Parks of Malaysia.

From personal experience I know, that even a Dog (like a Doberman) can easily chew up and break any nylon rope he is attached to, and will certainly do so. ..

Looks like the Tiger played nice so far. The situation has been reported to the PERHILITAN – and the Tiger is probably back in his cage by now – if he hasn’t eaten up the policeman…
Maybe the Tiger should be given to the Wildlife Park where they have some experience with dangerous animals.

John Teoh, the GM, could then write another sign, like he did on the cage
of the crocodiles, where we can read
something like:
“Stay away, otherwise the animal
might eat you and get sick”.