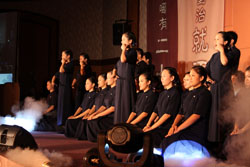 Be inspired and help others

Tzu Chi Foundation is a Buddhist organization that was founded in Taiwan. Unlike many Buddhist societies, Tzu Chi focuses on community and service outreach especially medical, educational and disaster relief. Today, the number of members has grown to about 10 million worldwide.

Last night, Tzu Chi Foundation held a Musical Drama at Bayview Hotel. Each ticket cost RM30 outside Langkawi, but the admission to the show yesterday night was free. Surprisingly, people of different age groups and races could be seen at the show. They expected 600 attendees but it seemed like more than that number turned up as the hall was full and I saw people standing throughout the drama. Values and messages that are pertaining to moral and education were delivered to the audience through the 2-hour musical drama. Besides that, a documentary video of true stories was played to inspire the audience.