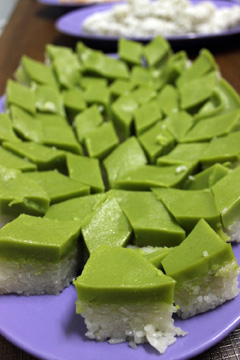 A few days ago, there was a blood donation campaign organised by the Langkawi Buddhist Society. Since Hari Raya Aidilfitri is approaching, the number of car accidents is expected to increase because there will be a lot of people driving back to their hometowns during the holiday. Therefore, the purpose of this blood donation campaign was to save lives of victims during this festive season.

My grandmother asked me to wake up early and help her out alongside with other volunteers at the Buddhist Society Centre. She made some light snacks which were served to the donors after they had finished donating their blood. As we were busy preparing more food in the kitchen of the centre, the Malay nurses came to set things up and waited for the donors to come. Although the campaign was supposed to start at 9 am, people began to slowly stream in to have their blood donated even before the start time. A donor had to first fill in a form to provide some personal details before having his blood tested to see whether it was alright for him to donate. Two young trainee nurses were guided by a senior nurse throughout the campaign. I noticed that not only Chinese volunteers went to donate their blood, but there were also other races of donors such as Indian and Thai people.

Although Malaysia is a multi-racial country, the people voluntarily help those in need regardless of their skin colour. It was a heartwarming sight. Thanks to those kind-heart people and the sincere volunteers, the blood donation campaign was a success.

It is still plain sailing in Langkawi !