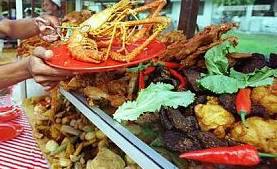 Malaysian food: there are just no limits to that term. What would you expect, when the country is such a melting pot of cultures. First we have the three main ethnic groups: Malays, Chinese and Indians. Then all the sub-groups, the regional variations, the different sub-cultural divisions, combined with the influences of our neighbours, the colonial powers, and our postwar partners.
Local food is a mixture of many elements, and no wonder then that the name of one of our most popular dishes, rojak, is also slang for a haphazard mixture of things. (The Chinese version of rojak is basically a salad of sliced fruits and vegetables mixed with shrimp paste; the Indian Muslim variety is sliced fritters, beancurd and vegetables eaten with spicy peanut sauce.). As a result of all these influences, there is seemingly no limit when it comes to the variety, and abundance, of food you can get here.

There’s food on sale literally everywhere you turn in Malaysia, from humble foodstalls (sometimes just a folding table, umbrella and chair) to coffeeshops to food courts housing a variety of stalls, to fastfood outlets to posh restaurants. We Malaysians love our food, and others’ too – it’s a fairly common sight to see us helping ourselves to a taste of what’s on our friends’ or family members’ plates. We can’t help it, we just need to taste it all!. Perhaps the closest thing we have to a national dish is nasi lemak – rice cooked in coconut milk and eaten with a range of side dishes and condiments. There is also satay, pieces of meat skewered on thin sticks, grilled over a charcoal fire and dipped in a spicy peanut sauce that’s somewhat thicker than rojak gravy. The town of Kajang in Selangor is famous for its satay, and many of its townsfolk have set up branches in other parts of the country.

Another type of meal that has crossed over from its ethnic origins (South Indian) to become a national favourite is banana leaf rice. Served mainly in Indian restaurants, it is simply rice that’s eaten off a banana leaf with an accompaniment of meats, curries, vegetables, pickles and crispy pappadoms. It’s fairly common to see business-suited individuals shed their jackets, loosen their ties, roll up their sleeves and tuck into a huge mound of BLR. Although not strictly Malaysian in origin, BLR has also incorporated local tastes into its vast menu. A variation of this is nasi kandar, which originated in Penang. The kandar is a long pole and the early vendors of this dish would carry their wares in two large containers balanced on the ends of a kandar – hence the name.

Nasi kandar consists of rice, curry and vegetables. although the Indian Muslim vendors who originated it would just have a few dishes to go with the rice, today’s nasi kandar shops boast everything from curries to freshly fried meat and fish to seafood in elaborate, bountiful spreads.