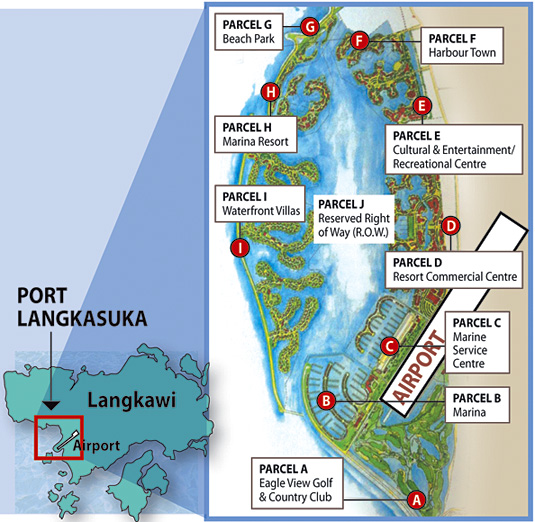 “Langkawi: Langkawi’s economic fortunes as a tourist destination may be enhanced if Sarawak businessman Tan Sri Ting Pek Khiing has his way.

He is proposing a reclamation of some 80 hectares of land for the region’s biggest marina centre, along with residential and commercial properties.

The proposed multi-billion ringgit “Port Langkasuka” project will comprise nine parcels of land containing among others, a golf course, resort and private villas.

“A RM200 million breakwater was built in the mid-1990s as a basis for this proposed development.

“I am hopeful that we can obtain the necessary approvals from the state government to proceed,” he told reporters after former prime minister Tun Dr Mahathir Mohamad opened the Four Points by Sheraton Langkawi Resort here yesterday.

The resort, which was previously known as the Langkasuka Beach Resort, underwent a RM30 million refurbishment prior to the rebranding.

The resort is owned by Global Upline Sdn Bhd – which also owns the Four Points by Sheraton property in Kuching, Sarawak.

Dr Mahathir, who during his tenure as prime minister worked closely with Ting, is raising the island’s profile as a preferred tourism destination, said that the duty-free island still has a lot of potential to be developed.

“There is still a lot of potential for resorts, as we have not used the mountains (to build resorts). Since the weather is cool up there, why not build a mountain resort?”

BACK TO LANGKAWI DEVELOPMENTS

Some good News from the Langkawi Self Help Center

The Maha Tower in Langkawi

The sad story of the factual closing of...

Tower To Be Langkawi Landmark

Bridge between Perlis and Langkawi