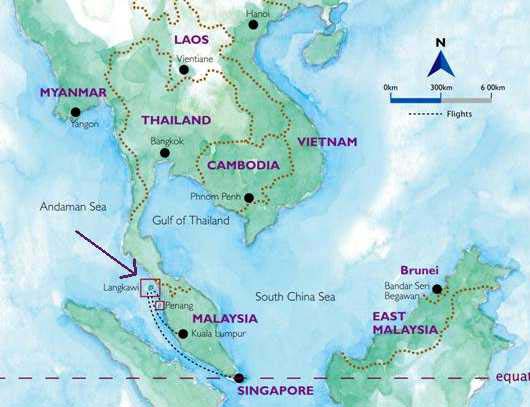 What is Langkawi?Langkawi is a tropical rain forest island, a ‘magical spot, a ‘Geopark, becoming an international tourist island – and still maintaing a backlaid island life – with still…

What is Langkawi?
Langkawi is a tropical rain forest island, a ‘magical spot, a ‘Geopark, becoming an international tourist island – and still maintaing a backlaid island life – with still plenty of old rainforest and wild animal life. Ad to this the white sand beaches – and the safe, openhearted multicultural environment – and you have the ideal holliday place.

Where is Langkawi ?
Langkawi is located west of Peninsular Malaysia between longitude 6° 21’ N and 99° 48’ E.

Overview
Langkawi is located on the northwestern peninsula of Malaysia and is an archipelago of 99 islands at high tide and 104 at low tide. Situated closer to Thailand than to mainland Malaysia (just 25km away), its waters are where the Indian Ocean narrows to meet the Straits of Malacca.

Langkawi is located only 800km from the Equator and is blessed with year-round warm temperatures and warm waters. The archipelago is famous for its white beaches and the relaxed and its slow paced island life. However, the jewels in our tourism crown are also the Langkawi Geopark and its natural treasures of serrated mountains that are home to a vast array of birds, butterflies, reptiles and animals.

Langkawi is a duty free Island that makes for a great value holidaying.

How Big is Langkawi ?
Consisting of some 99 islands, the total land area of all the islands combined is 47,848ha whereas the main island of Langkawi has a total of 32,000ha which is about the same size as Penang or Singapore. Palau Langkawi being the largest island within the archipelago is approximately 25km in length from north to south and 40 km east to west or 478.5km2.

Topography
Langkawi Island is covered by 60% forest, mountains, mangroves and shrubs with 20% being agricultural land and 20%, developed areas. Of all the islands, approximately 90% is forest and only three of the islands have some form of development. The topography varies from flat coastal plains of Pantai Cenang to the mountainous peaks of Gunung Raya (880m) and Gunung Machincang (713m). There are also many sandy beaches on the main island numerous deserted beaches on the other islands within the archipelago. 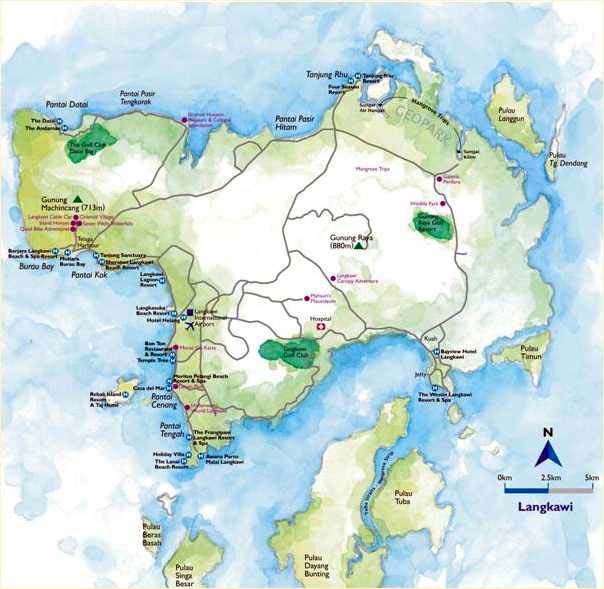 People of Langkawi
The population of Langkawi is approximately 64,000 and made up of 89% Malay, 8% Chinese and 3% other races.

Weather
One of the more confusing things about Langkawi weather is that it is the complete opposite to the East Coast of the peninsula. So when it’s raining there, the weather in Langkawi is normally good. However, Langkawi in general is a much drier rainforest that it’s East Coast counterpart even in the wet season as the islands are located well away from the main mountain ranges. Even during wet season it is very seldom that Langkawi experiences rain for extended periods of time. During these wetter periods, it rarely rains for more than 2-3 hours at a time.

Check out the weather in Langkawi:
http://www.weather-forecast.com/locations/Langkawi-Airport/forecasts/latest

Tourism Season
Langkawi’s main tourist season is from Christmas through to the end of April. The island is often busy during domestic holiday periods such as Chinese New Year and Hari Raya. However, due to the warm year-round climate and low rainfall, Langkawi can be visited throughout the year.

Security
Luckily there have been no major recorded security breaches though it is advisable to use hotels with sound security measures in place. There are minimal reports of petty theft and care should be taken at all times to valuables and self.

Getting Around
Being a small island, Langkawi is relatively easy to travel around. In Malaysia cars drive on the left side of the road. Direction signs tend to be in English as well as Bahasa Malaysia but many road signs are in Bahasa so it’s worth checking out the translations.

Driving is quite relaxed although it’s best to drive carefully especially in rural areas. Langkawi – like probably most asia countries – has about 3times more road accidents and traffic deaths than we are used from western countries. This is mostly due to missing attention, speeding, motorbikes driving without light on the wrong side of the road at night and wild animals on the street.

If you drive carefully and defensively you will be safe.

Taxis
Taxis are readily available and reception staff in resorts can make bookings for you. The taxis work on a fixed priced basis and we do recommend you check the rate card when your fare is quoted. Some taxi drivers speak better English then others and they can prove to be very useful for around the island trips as they can identify many points of interest. Taxis can be hired from the airport, all hotels and major attractions.

Hire Cars
Roads in Langkawi are well signposted and in good condition so hiring a car for a self-drive adventure is a good option. It is recommended that you use a licensed and insured car rental company to prevent any unpleasant surprises in the event of an accident. While cars hired from resorts and hotels maybe more expensive than those elsewhere it can be assumed that they are insured.

Tour Guides
Tour guides are available through most travel agencies and it is recommended that visitors request trained and licensed guides who practice the principles of responsible tourism.

Language Spoken
The official language of Malaysia is Bahasa Malaysia however English is widely spoken and usually to a high standard in the hospitality industry. In fact, visitors who wish to practice the local language can be frustrated by locals answering questions in English.

Currency
The currency of Malaysia is Malaysian Ringgit. Money can be changed in many places from the airport to the banks in Kuah which tend to have the best exchange rates.

Duty Free Island
Langkawi is a duty free port which means you can find real savings on high taxed items such as cigarettes, alcohol and some electrical items.

Religions
Langkawi is predominately made up of Malays who are Muslims. There is however a small percentage of Buddhists, Hindus and Christians on the island and most religious holidays are celebrated.

Hospital
There is a quite well-equipped, modern hospital on the island which can cope with minor emergencies – or even more severe cases IF the needed specialist is on Langkawi….. Anyone with a more serious illness or injury has to be transported by ferry to the mainland – to the Alor Star Hospital. A medical emergency helicopter has been projected several times but there is still none in operation at this time.

Dentists
There are several dentists on the Island performing high quality work as well as very affordable prices. Many visitors to Langkawi do take advantage of these services.

Chemist / Pharmacy
There are several excellent pharmacies on the island which can provide medication for most minor illnesses and topical injuries. They are located in Pantai Cenang, Kuah and Padang Matsirat

Banking
Banking services are available in Kuah through a number of different banks. Foreign exchanges operate at the airport, ferry terminal and in various locations throughout popular tourist areas.

Boat Harbours
Langkawi is a popular sailing destination and as such there are four marinas in Langkawi, The Royal Langkawi Yacht Club in Kuah, Telaga Harbour near Pantai Kok, Awana Porto Malai near Pantai Tengah and Rebak Marina situated on Rebak Island. Aside from this you will also find many boats moored and at anchor around the islands.

For the TIDES see here

Working Hours
Due to the importance of Friday prayers for Muslims the business week for most activities in Langkawi is from Sunday to Thursday. Many shops and businesses will be closed on Fridays, reopening after midday on Saturday. However this does not apply to banks which are open the Malaysian wide hours of Monday to Friday.

Public Holidays and Events: – see the Notice Board on the Home Page

Power
Power in Langkawi is provided by TNB. It is 220 volts and a three square pin plug is used.

Water
Tap water in Langkawi is potable by local authority recommendation though it is advisable to drink bottled water.

Back to the Home Page