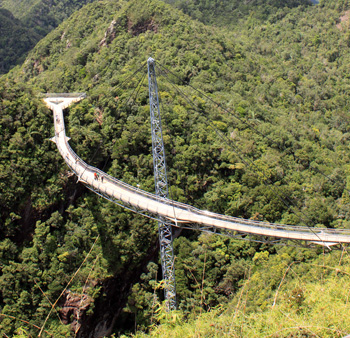 TripAdvisor, the world’s most popular and largest travel community announced the top five most jaw-dropping and top five scariest bridges in the world yesterday. Among the most intimidating and historically significant bridges around the globe, Langkawi Sky Bridge surprisingly took the number one place in the top five world’s scariest bridges. Visitors are able to set foot on Langkawi Sky Bridge by taking a cable car ride at Oriental Village. Completed in October 2004, this beautifully curved Langkawi Sky Bridge is one of the world’s highest single supported bridges suspending in between Mount Mat Chinchang. It sits more than 2,200 feet above sea level, stretches about 400 feet, 1.8 m-wide and completed with two 3.6 m-wide triangular platforms for viewing and resting. Located at the peak of Langkawi Island’s Mount Mat Chinchang, this half-moon-shaped pedestrian cable-stayed bridge offers visitors a magnificent 360 degree view of the Andaman Sea and the islands in the vicinity. Unlike straight bridges, the curve provides different perspectives over the land and sea.