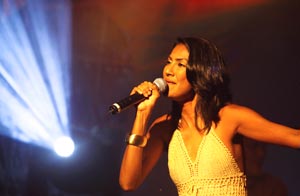 Music lovers on the island breathed a collective sigh of relief when the One Earth Music Festival, Langkawi’s only music festival ever, made it into its second year on Nov 2 & 3 after months of desperate scrambling for sponsorship by its organizers.

At least one good thing came out of the festival’s limited budget: the organizers still couldn’t afford to fly in many acts from abroad (this year only one), thus making this last festival mainly a showcase for Malaysia’s best musical talent, which I think was a great thing. One Earth has, by default, become the only event where homegrown musicians can strut their stuff together at one festival.

As someone who has never had the chance to check out the club scene in KL, I’ve been blown away for two years straight at this festival by the calibre of Malaysian musicians and songwriters. As I said in my review of last year’s festival, Malaysia’s musical artists are good enough to compete with the best of them anywhere in the world, and this year’s festival confirmed my theory that there are many more hiding in the woodwork.

This year’s festival featured even more original composers. The festival kicked off at 6pm Friday evening with Kien Lim on acoustic guitar backed by Ashly Nandong playing pop licks on a traditional Borneo lute called a sapeh. Lim played folk, blues and acoustic rock numbers with punk attitude. His compositions showed a definite mastery of roots rock and he delivered a great set, but unfortunately only about 30 or 40 people had shown up during his slot and almost all were mingling and getting buzzed at the bar instead of listening to him.

Lim was followed by Liyana Fizi. Of all the artists that I saw during the festival, I couldn’t help thinking that Fizi is going to be the next Malaysian singer/songwriter to break out internationally after Zee Avi. Fizi’s songs are breezy and poppy but delightfully unpredictable, much like Australia’s Lenka.  Like Avi and Lenka, Fizi sings in a voice drenched in doe-eyed innocence (she has an adorable pixie face to go with the voice too) and that whole female lost-waif singer/songwriter persona is very much in vogue these days. When I checked on Youtube, she had a video with 94,000 hits.

Fizi’s set was followed by Michael Veerapen and a new incarnation of his band from last year. Veerapen is a monster on jazz keyboards, idolized by all young jazz players in the country, not because of his formidable technique alone but because of his uncanny sense of timing. One can’t call him a fiery, passionate player because he’s always oozing a sense of cool. No matter how fast or hard he’s playing, he’s always just behind the beat – a sure sign of a musician with total mastery of his instrument.

Headliner Saxman Koh from Thailand came on in a blaze of red-hot R&B sax solos and slick moves. The audience went nuts but Koh (who obviously doesn’t come from a be-bop background) must have felt overwhelmed with Veerapen and his ace jazz band behind him, because he blew wall-to-wall solos at volcanic intensity, which I found exhausting after awhile.  It was not until the following night when he backed acoustic solo guitarist Reza Salleh on some mid-tempo blues that Koh showed just how much finesse and grace he was capable of. Later, when he and Veerapen backed R&B singer Poova on some hot soul numbers, Koh performed like a master sax player instead of a master crowd-pleaser. His solos on the second night were gorgeous and focused instead of a continuous series of attention-grabbing pyrotechnics. Don’t get the wrong idea about Koh – he’s no egomaniac. In fact, he’s one of the sweetest guys I’ve ever met.

Day Two started with a huge thunderstorm that moved in during the first number by opening act Panji Warisan, a traditional Malay band from Langkawi. The storm delayed the band’s set until 8pm. Panji Warisan’s opening numbers were played in a violin/accordion format that was unfortunately relentlessly stiff, with every violin note played in unison with the accordion right on the beat. Perhaps the music is meant to be played that way but they were losing the audience fast.

Things loosened up considerably with their second set of songs when they mercifully put away the violin and accordion and one of the percussionists started wailing on a serunai (traditional Malay reed instrument pitched even higher than a soprano sax) while two players banged out a heavy tribal beat on two-headed gendung drums.

Serunai songs don’t have a hummable melody like the violin/accordion folk tunes that started the set. They are heavily influenced by Arabic and Indian musical scales and I suspect the solos are mostly improvised. The serunai’s piercing tone and slithering melodies made it exceptionally hypnotic music, especially with the dual attack of gendung drums.

Reza Salleh came on with a set of acoustic rock and pop tunes reminiscent of Tracy Chapman (Reza covered one of her songs). He is a likable young singer/songwriter with a big, smooth voice and a powerful acoustic guitar style.

Next on the list was contemporary R&B/soul singer Poova Plachiak, who came in with the same hurricane force as the thunderstorm at 6pm and dazzled the crowd with her massive voice and slick dance moves. I’m not sure if the audience, mesmerized by her dynamic energy and good looks, noticed that the songs were beautifully-crafted original compositions by Poova herself. I thought some of her songs were good enough to be submitted to Aretha Franklin or Tina Turner if any of them were contemplating a comeback album. I found this an amazing fact because composers of contemporary R&B are never performers themselves, let alone performers with such showmanship and vocal technique. 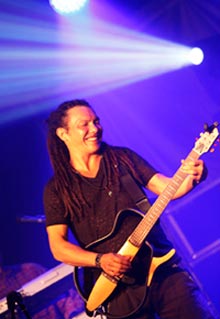 Amir Yusoff closed the festival with his unique brand of music that was a mix of blues, folk, classic American rock and maybe some 70s-era Tom Waits thrown in. He had the most charisma of all the performers, a man of Buddha-like calm and a totally effortless vocal style. His music might be hopelessly out of synch with current pop trends but there’s a timeless quality to his music and he was one of the highlights of the festival for me.