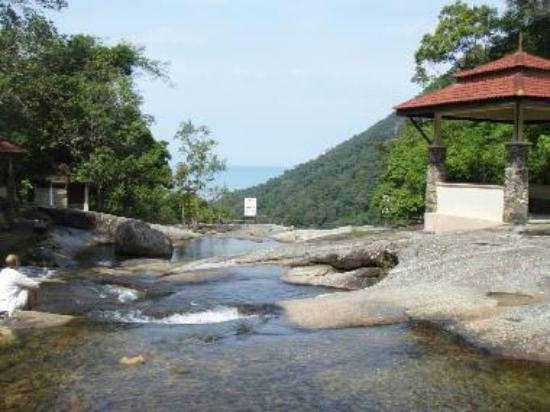 Location: To see where it is, open the Overview Map and look for

This waterfall, situated near to Telaga Harbour is considered by many to be the most beautiful waterfall on Langkawi & has one of the legends of Langkawi associated with it. It is said that the wells, or pools at the very top of the falls are where Fairies come to bathe.

Approaching from Pantai Kok you find a small car park which has a RM2 charge for cars & RM1 for bikes, there are also a number of small shops selling drinks, clothing & food.

From here you can either take the steps on the right hand side of the shops or walk up the very steep incline of the service road to get to the steps that will take you down to the base of the waterfall itself, where the pools provide welcome relief for tired feet & kids love to splash about.

For the more intrepid, you can take the 638 steps through the rain forest to the top of the waterfall & will be rewarded by the beautiful views across to Burau Bay & Pantai Kok.

This climb is fairly tiring so you may need to make use of the rest areas provided & just relax & listen to the sounds of the forest while you catch your breath. Once at the top the seven wells become apparent & you may even wish to bathe there yourself & use the natural rock slides which are suitable for kids of all ages.

From this stage there is a well marked & sign posted jungle path leading 990m further up the hillside but keep to the path as it is very easy to get disoriented.

Be careful to obey the warning signs as they are there for your safety.

On your return to the car park stop at the shops for a refreshing cold coconut, it’s really refreshing.

The above article – including the pictures – was recently posted by “Manic Mick” on Trip Advisor and he was so nice to give us the permission to bring it here. Thanks Mick !

Located at Burau Bay, on the slopes of Mt. Cincang, this 91 meter high seven level waterfall is a good thing to see if you are feeling particularly energetic one day. It is a 900 step climb to the first part of the waterfall. Depending on the pace you adopt, it could take between 45 minutes and an hour. On arrival, one is some what sweaty and exhausted but it will definitely be worth the effort: as soon as you reach the top, a 90m waterfall greets you.

Seven waterfalls flow one into the other and create seven pools on the face of the hill, hence the name. The swift flowing water has smoothed the rock surfaces so that water slides from one pool to another; finally cascading 90 metres down into the seventh pool. So pretty are the waterfalls, it is said that fairies were unable to resist the charm and made it their bathing place – and the water is believed to have healing properties. Once a mountain prince tried to capture the fairies but luckily they managed to escape.

A type of climbing plant with enormous pods commonly found near the waterfall area is believed to be something the fairies left behind. Known as Sintuk, it is a special kind of lime plant. Locals frequently use it to “wash” away bad luck. Sintuk is also commonly used in traditional Malay ceremonies.

Accessible by car, motorbike or taxi; one metre after passing Pantai Kok, take the right turn, away from the Burau Bay Resort until you reach the car park. There are souvenir stalls at the foot of the hills. A short climb to the top of the falls will take about 45 minutes, with many things to see as you make your way through the rain forest.

Delightfully playful long-tailed macaque monkeys can be seen along with – if lucky – the giant cream coloured squirrel that are well known in these parts. You may even catch a glimpse of a hornbill hanging out of the treetops – with its huge hooked orange beak it is considered the most unique of all Malaysian birds. Listen carefully and you’ll be able to make out the cackle-like call that it makes.

There have been several people killed and injured at this place – because they did not adhere to the safety regulations.

Here are the voices of a few ‘Langkawi-Gurus’ on the Trip Advisor, to give you the right picture.

“7 wells is in 2 stages, the fairly easily accessible pool at the bottom of the falls, or you could climb the 500 + steps to the top of the falls.
There is a rope barrier there to stop you from going too close to the edge & warning signs pointing out that it is dangerous. Please do not disregard these warnings as it could have dire consequences as it is a 65 M drop to the bottom.”
Mick

“Apparently the rocks at the top of the Seven Wells can become very, very slippery hence the fact that people fall, probably over the waterfall itself. Very tragic.”
Lesley

“The deaths at 7 wells with which i am familiar, have been male adult tourists, mostly honeymooners. they have all climbed over the barrier to stand near the top of the falls in order to have a photo taken without the barriers and huge danger signs in the picture. dying for vanity one might say. The rocks are slippery when wet, that is obvious to anyone. The area is very beautiful, and well worth a visit, but common sense is required, the same as anywhere else. The barriers are set well back from the top of the falls.”
Pam

Go back to the first page of the Langkawi Waterfalls