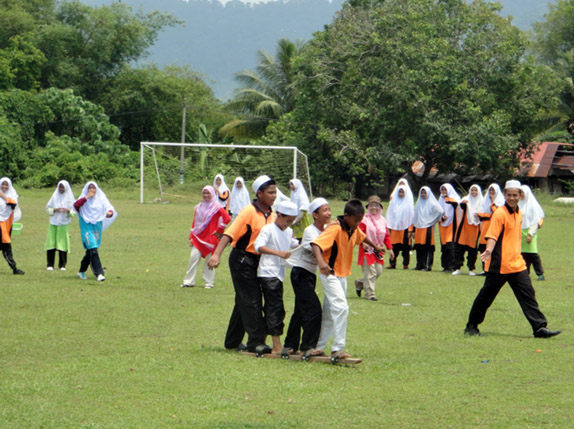 An initiative of the local community, the school was founded three years ago – with the objective to develop local talent, and empower gifted teenagers to become the leaders of tomorrow. The curriculum is approved by the Malaysian Government and includes Islamic teachings specified by the Religious Board.  Currently, there are 220 students, all between 13 and 15 years old.

The Sports Day is meant to encourage students to develop team-spirit and balance their academic efforts with physical exercise while promoting the school among potential students and their families and facilitating interaction with the community.

The event started at 10 am with an opening speech given by Mr. Zubir Ahmad, the Board Director of Town Council of Langkawi, Sheikh Muhd Noor Ismardi, Langkawi’s Islamic leader, and Mr. Yusoff Ismail, the school’s Principal. Representatives of the State of Kedah distributed among those in need generous donations.

A football and netball match were followed by fun games from jumping in sacks, through relay race with balloons filled with water, to a traditional ‘Giant Sandals’ competition with groups of four kids walking on wooden ski-like planks trying to reach the finishing line prior to other groups – or at least without tumbling 😉 .
Cheered on by the parents, the kids had a great afternoon! 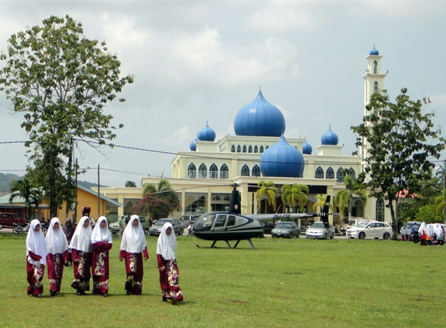 The highlight? Sponsored by anonymous expatriates, the best 40 students were treated to a free Joy Ride in a helicopter.

As a generous gesture of Faiz Fahmi Sazali, the managing director of Helitours, other students, their parents as well as public were invited to enjoy a helicopter ride at a preferential rate of 90 RM. For the majority a once in a lifetime opportunity, the helicopter didn’t get a break during the entire event!

SEKOLAH MENENGAH AGAMA RANGGOT is funded by local business owners and relies on donations from the Government and public. Any contributions to the following account are highly appreciated:

Back to LANGKAWI FESTIVALS

The sad story of the factual closing of the best beach of Langkawi: Tanjung Rhu