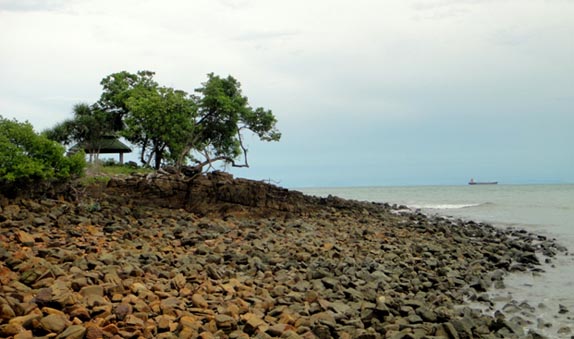 A huge fan of adventure trips, I get easily excited when learning about a new opportunity to explore our island. And so when I hear about ‘The Fisherman’s Trail’ recently launched by
NADI ECO ADVENTURE, I cannot book fast enough!    (Many more pictures !)

Arriving at a small jetty in the KubangBadak area, I’m immediately thrilled. Rather than encountering crowds of tourists, I see local fishermen following their daily routine. I watch them prepare lures and mend the occasional hole in their nets. And then, one by one, they start the engines, and their boatsquickly disappear in the mangrove labyrinth. The perfect prelude to experiencing the fisherman’s life first hand!

I walk along a narrow footbridge, take a few steps down and Hazril, my Nature Guide,reaches out to help me on board. Barely seated, I enquire about the exact itinerary of our trip – just to see Hazril and Fendi, our skipper, chuckle. At the mercy of winds, currents and tides, a fisherman doesn’t waste time planning too long ahead. It’s all about listening to the nature and trusting one’s instinct.

Leaving the small jetty behind, we follow the course of the river, discovering behind each curve new enchanting vistas: the conic mountain of Bukit Kelawar, named after a bat cave hidden at the foothill, limestone formations with fossilized shells just above the water surface, a pavilion on a deserted beach, built to provide shelter during unexpected storms…

But what I find most captivating is the peace and quiet. Although in the middle of a peak season, there is not a single tourist in sight. And so we only get to hear the sounds of nature: the splash of water as a fish jumps out, the flapping of wings above our heads, rustling of dry leaves that gives away a monitor lizard somewhere between the entangled roots of the mangrove forest.

Fishing to provide for his family, Fendi decides it’s about time we get to work. I watch him cast a largenet until it fully unfolds, covering the water surface some 50 meters in front of us. A small attached buoys make the net float while strategically placed weights ensure it doesn’t get carried away by the currents.

Steering deeper into the mangroves, we reach the riverbank. Covered with crooked roots, the swamp teems with mud skippers – bizarre walking fish with prehistoric look, and there are hundreds of fiddler crabs ecstatically waving with their cloves to attract a female. I could watch this miniature world forever but we came with a purpose! Without an apparent reason, Fendi burrows his hands deep into the mud and pulls out a huuuge mussel. And then the second and third – until he can barely fit them all into the palms of his hands. A complete mystery. How would he know where they are buried?! I learn that he pays attention to the mud surface, looking for tiny bubbles. A gimlet-eyed guy if you ask me. I would need a magnifying glass to notice!

I spot a blue crab carrying a large chunk of mud and when questioning his unusual freight, Hazril explains that the high tide is about to come in. To escape the water, the crab will hide in an underground tunneland needs material to seal the entrance. How resourceful!
But with the water levels rising, also we have to hurry up. Unfolding a crab-trap, Hazril places inside a bait, and Fendi looks for a hole in the mud, hoping to lure the crab inside. 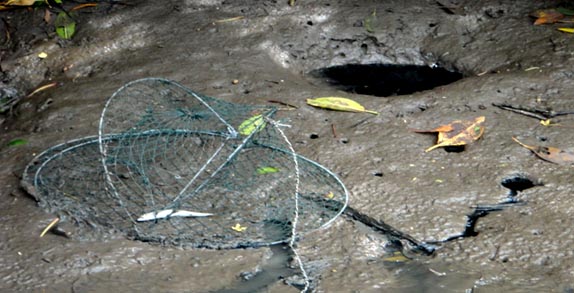 To pass time until the traps are ready to be checked, we head towards the open see. Fendi throws into the water a small bell-shaped net with heavy rings along the bottom girt. Pulling back as soon as the net touches the ground, he catches a swarm of shrimps. Looking for some challenge, Fendi and Hazrilput lures on the hooks and holding the fishing lines with their bare hands, they try to catch some groupers that tend to hide between the rocks on the ground of the sea. It takes only a minute or two, and the casts begins to tauten.With their hunting instinct awoken, both guys begin to pull as fast as possible… only to discover that the groupershappily took the bait and left. Sneaky fellows! When the story keeps repeating itself, with our only catch so small we release it again, we jointly decide to give up and return to the mangroves. A smart move as it turns out. Another fisherman we encounter a short while later has been trying for hours – with exactly the same result. The life of a fisherman is not always easy…

Our mood lifts the moment Fendi pulls in the first few meters of the fishing net we left earlier behind. It’s full of large crabs! 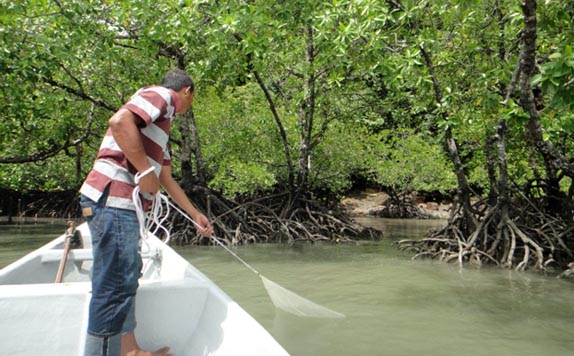 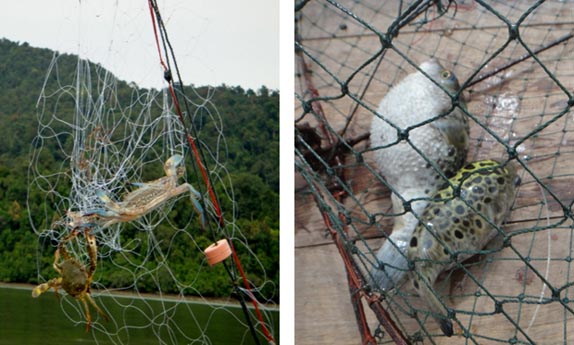 Returning to the mangroves, we are dying to see whether we got lucky with our traps. I’m actually surprised we are able to find them again. With the riverbank still flooded, not an easy task. But knowing his mangroves by heart, Fendi steers towards the right spot. And all the traps are filled! With mud crabs as we hoped. But we also find a rather unexpected catch – the pufferfish! Although considered the second-most poisonous vertebrates worldwide, it is a sought-after delicacy among the Japanese. One only has to hope the Chef is well trained, capable to tell which part and what quantity is safe to eat. Lacking the necessary knowledge, we let the pufferfish free. No need to risk considering the bountiful catch we are bringing back.

Arriving back at the jetty, the table is already set and the charcoal is glowing so all we have to do is place our booty on the grill. The air instantly fills with scrumptious aroma and with my mouth watering, I’m glad it only takes a couple of minutes for the seafood to be served. There is a selection of savory condiments on the table but I could easily do without. Due to the saltwater habitat, the juicy flesh of the crabs has just the right flavor. And if you never tried the giant mud mussels before, you won’t believe the taste! 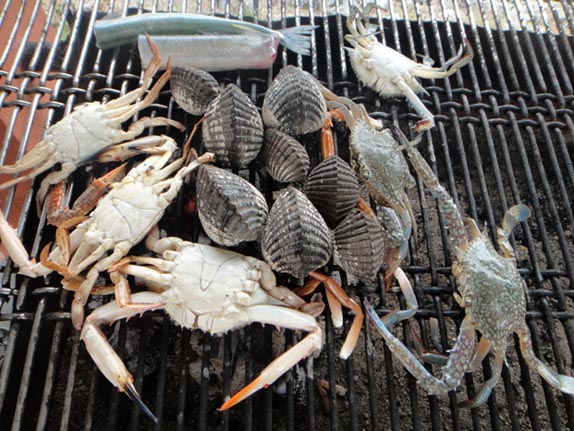 Filling my plate over and over again, I’m not only making the most of the wonderful culinary experience but also delaying the time of my departure. I had such a great day, I really don’t want to leave. Then again -I have a feeling it won’t take long for NADI ECO ADVENTURE to come up with another amazing trip. Run by people with passion for nature, great sense of professionalism and plenty of new ideas, the new company is sure to have a few more surprises up their sleeve.

Happy New Year – Development of the Langkawi Gazette in 2013

The Poetry of Riding Waves

Birding with Jungle Walla in Langkawi