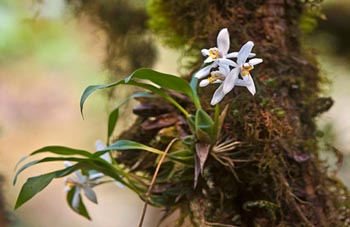 DISCOVERIES ALONG THE SKYTRAIL

Having emerged from the sea in the Cambrian Era550-490 million years ago,prior to any other part of the Malay Archipelago, GunungMachinchangis one of the most unique places on the island. Living in Langkawi for nearly three years now, of course I enjoyed a couple of times the wonderful ride with a cable car, mesmerized by the breathtaking panoramic view from the peak. But somehow, I always felt I only got to ‘scratch the surface’, unable to feel the primordial energy of the rocks, to hear the echo of times gone by…A feeling I hoped to cast off when signing up for a guided tour through the Machinchang Cambrian Geoforest Park, recently launched by a Langkawi-based discovery company, NADI ECO ADVENTURE.  – many more pictures ! –

Not necessarily an experienced hiker, I briefly wonder whether I may be overestimating my stamina when choosing the ‘extreme’ trail that leads from the foothill to the very summit rather than settling for one of the shorter versions. But eager to experience as much as possible, I stick to my original plan, put on my trekking boots and turn up at 9 am at the meeting point in Oriental Village.

A passionate Guide with more than a decade experience of leading nature tours for 5* resorts, Hizam greets me in perfect English and insists that we do some stretching prior to hitting the trail. Just to make sure the body is warmed up and all joints loose – ready for the expected four hours climb.

We barely start walking and it begins to drizzle. In the middle of a rainy season, I’m silently wondering whether I picked the wrong day. But Hizam kneels down to have a close-up look at a colony of ants. Hurrying towards a crevice in the ground that would be filled with water within minutes during a heavy downpour, they don’t seem overly alerted, clearly anticipating only a brief shower. And so we continue walking -Hizam comforted and I deeply impressed by his understanding of the secret language of nature.

The path leading through an abandoned rubber tree plantation gradually steepens and before I know it we are deep in the jungle, listening to the purling sound of the Perangin River.

Excited about the biodiversity of the Machinchang Cambrian Geoforest Park, Hizam shares that within only one kilometer of our hike, we will encounter 1,500 species of trees with more than half of them having medicinal properties! Just a few steps later, he shows me Tongkat Ali, a local miracle plant withroots considered a potent aphrodisiac. Pointing to the winding lianas that tie around groups of trees, he explains that the bond protects them against strong winds and landslides. Always eager to expand my knowledge, I’m trying to take in as much as possible but the jungle seems to have casted a spell over me…

The dense foliage allows only a few sunrays to reach the ground, and when I look around in the mysterious twilight, I see all these bizarre trees: some growing giant carbuncles, others shedding their skin, and those next to themopening their hungry mouths with sharp prongs… When hearing stories about jungle spirits in the past, I used to dismiss them as fairytales. But surrounded by these peculiar images, I’m suddenly not so sure. As though Hizamcould read my mind, hewhispers that some of them are good-natured. And as we silently acknowledge their presence, the strange moment passes and all we see is a rainforest path flanked by unique species of flora and fauna…

Hizam points to a rust-colored tree with a peeling bark, sharing that it is used to prepare a remedial oil for painful joints. And on the ground, half hidden underneath dry leafs, is a tiny red mushroom that helps against asthma. When we come across a Resak tree with crystals of hardened sap on the trunk, Hizam breaks off a small piece and holds it briefly over a flame. The air around us is instantly saturated withan exquisite fragrance so I’m not surprised to learn that the resin is utilized in the most expensive perfumes.

As we continue walking, Hizam is alerted by an oddly shaped leaf of the umbrella tree. And indeed – when he gently lifts the rim, we get to see a few sleeping fruit bats hanging upside down from the flipside.A little while later, we notice on a tree trunk in front of us a giant egg-shaped termite nest constructed with craftsmanship one can only admire. Made of soil, chewed wood and saliva, the elaborate structure is waterproof, and punctuated by a maze of tunnel-like galleries, the nest has evenair conditioning system.

As a tiny white floret lands on my shoulder, I look up, expecting to see a blossoming tree. But we spot instead a Pit Viper Snake resting on a branch above our heads. With his eyes closed, he looks rather innocent. But as I learn, due to unique infrared-detecting organson the sides of his head, he isable to detect potential prey without looking. What a comfort we are too large for his taste.

Close to the summit, we take a quick detour down the hill and to the other side of the mountain. A little surprised, I draw a breath to ask. But the enchanting viewthat opens up in front of us makes me lose my tongue: growing on rocks and trees, there are countless species of wild orchids, their delicate beauty contrasting with the sharp edges of the boulders and the rough structure of the tree trunks.Attracted by their exquisite scent, there are swarms of colorful butterflies twirling in the air. A mesmerizing view! No wonder, the locals call this hidden valley the ‘Secret Garden’.

Onour left is a giant block of exposed rocks. Made of sandstone with cross-beds, ripple marks and load structures of marble and quartzite,the stone wall resembles a history book with each layer giving away a chapter of the ancient past.

Only a few steps from the peak, I glance for the first time at my wristwatch. The sweep-hand is not moving, with the watch still indicating 9.12am! Pretty much the time when we set out on our discovery journey.

A coincidence? Counting hours in the face of history that goes back 550 millions of years, does seem alittle bit absurd… And so, rather than looking for a rational explanation, I take it as a sign and spend a few more moments in contemplation.

After admiring the breathtaking 360 degrees view from the summit, we board a gondola and glide down the hill, admiring the deep chasms, overhanging cliff walls and isolated pinnacles underneath us. I even spot the Seven Wells Waterfall.But no matter how hard I try to detect the path we previously followed, the Skytrail remains hidden by the dense rainforest foliage. Keeping its secrets until you jointhe passionate guides from NADI ECO ADVENTURE…

The Poetry of Riding Waves

Birding with Jungle Walla in Langkawi