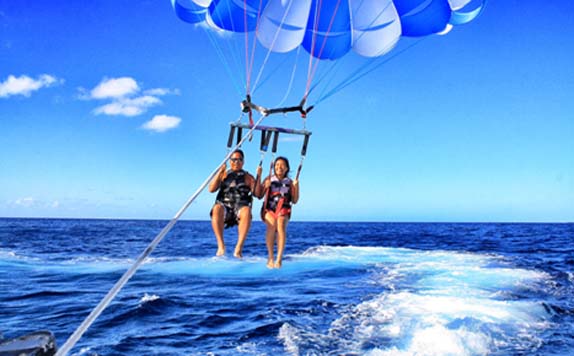 While the number of arrivals tends to be presented by the authorities in a very positive light, those involved in tourism business have another story to tell. And that despite a currency exchange rate that should make Malaysia a top desti-nation for foreigners while simultaneously discouraging domestic travelers from booking trips abroad.

Considering that nearly 80 % of the island’s population relies on tourism as a main source of income – a development that impacts us all!

While the majority is simply hoping for the best, some feel compelled to take action. Determined to boost not only their own business but to benefit the whole island! Targeting German travelers, known as enthusiastic nature lovers with high disposable income, the new owner of DEV’S ADVENTURE TOURS pulled all the strings to get a full Langkawi feature aired on the leading German TV channel, ARD. Revolving around eight German couples who travel on a superyacht to discover the world’s most fascinating destinations, the show ‘Lust auf Meer’ is widely popular. So just the kind of exposure we need!

A Langkawi resident for 23 years now, CLAUDIA MUELLER knows the island by heart. So the itinerary she put together covered the most captivating experiences our island has to offer. While two TV production crews accompanied four travelers as they lazed on the beach, enjoyed a ride with the Cable Car and had some fun at ‘The Art in Paradise’, Malaysia’s largest 3D Museum, the third crew guided by Claudia joined a bicycle tour to experience Langkawi just as the locals do.

Pedaling along tiny roads that honeycomb the countryside, they got to experience the sleepy atmosphere of local fishermen villages, watch herds of buffalos relish a mud-bath in the paddy fields, and observe a local artisans working on a traditional batik piece.

Of course, their experience wouldn’t be complete without a stop at a small local eatery and the delicious taste of roti canai accompanied by tea tarek.

A rather symbolic choice then to truly appreciate the local culture, one has to explore all her flavours. And no one knows more about indigenous herbs and traditional spices than our Shukri!

The Langkawi Feature should air on one of the most watched German TV channels at the beginning of next year. So if you are a local business owner – time to start practicing a few welcoming phrases in German 
A traveler eager to experience the real life of Langkawi? Follow in the footsteps of the German explorers by joining the Nature Cycling Trip with Dev’s Adventure Tours.
A captivating experience you don’t want to miss! GOING WITH THE BUFFALOS… in Langkawi